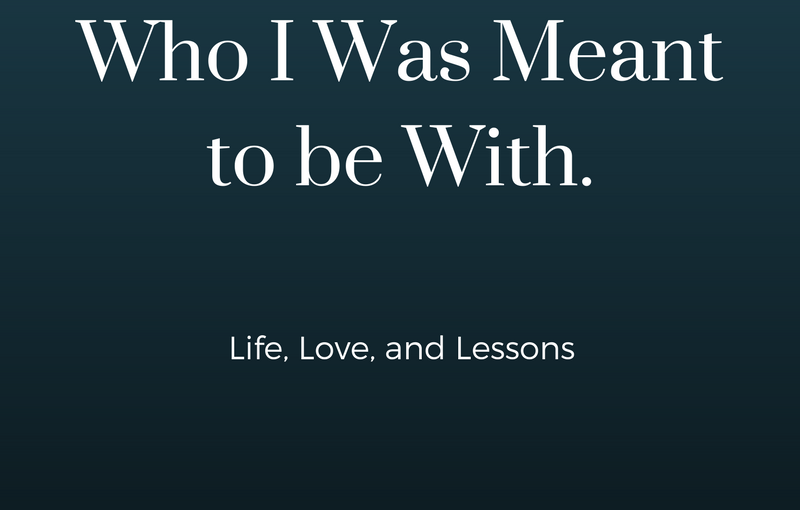 Seventeen years ago I met a man that I agreed to marry.

I can honestly say that I was too young to get married at age 24…maybe I should say I was too immature. But who’s to say who’s mature and who’s immature at that age because from the outside looking in, I had it all going for me in the ‘maturity department’. I had a dream, full-time job that I loved and that paid for our lives (his income was extra). I owned my own home. I had a car almost paid off. I had little debt. BUT looking back, I never should have been given the ‘license to get married’.

My parents marriage looked easy…but only because I focused on the marriage that I remembered from about age 13 and on…and by that age they had been married for 18 years and at that point married couples tend to have an ‘ebb and flow’. I thought my marriage would be easy, or at least easier than what I went through.

But then you add in-laws (that aren’t easy – really tortuous) and then add in disease within your own family, throw in a dose of kids and a spouse that didn’t add physically what he didn’t add financially and then you have a whole lot of resentment.

And I had no idea how to deal with it. And to be honest, I can clear my conscience by saying that because of the disease, there is nothing that I could have done (and we tried a lot of things) that could have saved my first marriage.

Then a rekindling of a romance that was older than my first marriage started after I filed for divorce from my first husband and it was on! The butterflies, the sweet-talk, the hours of conversation, the romantic texts, the first time that anyone said ‘I love you’, the late night calls, the calls just to say ‘I love you’, the excitement before you see them the weekend that you don’t have the kids, the giddiness in choosing the perfect outfit…the excitement of a new love.

I had never felt it like I did with Erik. We would text all night…he would call me in the middle of the night when a rough night as an EMT happened, I would call to get his advice about how to fix something on my car, we would make each other laugh about the stupid things his brothers had done or why my boys would decide to stay up talking about Power Rangers for an hour after I told them to go to sleep.

Erik got me, understood me, we made each other laugh, we were there for each other when we needed to cry. When his dad decided to haunt me (he passed away in 2008), he would tell me how to stop the ‘haunting’; when I needed to give him another perspective other than the “I’m going to throw my gloves down and fight” perspective, he would call me. When I had a late flight home, I knew I could call him and he’d pick up, because he was working late too. He had faith in my skills and gave me the leeway to grow his business and I did it to great heights. We both love country music, we both understand that it’s fun to sit on the patio, around the fire pit and do nothing else…just sit. I didn’t have to fill empty air with him – he understood me. We were great.

Until we weren’t. Until he thought that the grass was greener on the other side.

Now his ‘perfect’ life is defined as living with his felon-brother and complaining non-stop about how much he has to work. Poor guy – he left a great life with a capable wife to live with his brother and be under his mother’s control because she has the money (or at least used to). Can you hear the sarcasm in my words?? 🙂

With all of that said, I still honestly believe that I was meant to be with this man. Maybe I feel that way because I am still so close to the situation, but if his family weren’t influencing him, I truly believe that we would still have a chance.

For heaven’s sake, he didn’t even offer any help during the prep for Hurricane Irma or the cleanup after Hurricane Irma. I had to ask him for help to move the piece of junk Jeep that I bought and he was ‘improving’ so that I could get my car in the garage. Stand-up guy, right?!?

But that’s not who I was with for years before his family moved to town. I was with a man that was suited to be an EMT, a man that cared so much about people and how they were feeling, how they were doing, that it scarred him to see people in such distress one night after a car accident that he responded to, that he wasn’t sure he could continue in this field. I even pushed him to go back to school to become a nurse because he was that perfectly suited to be in that field. He was just that caring and had such a huge heart for others.

Within one or two months after his mom and brothers moved to town, he forgot who he was without them. He changed his whole persona to please them and meet the view that they had of him…to make his mommy happy, not his wife. He threw me to the wayside.

Stinks that he chose his mom and his adulterous life over his own wife and kids.

My New Love Life…whenever that happens…

It’s going to be hard to start dating again, because right now, I still believe he is the man I was supposed to be with for the rest of my life. Twelve months from now I may tell you something different but until then it still hurts to not walk hand in hand down the sidewalk of life with him. It’s still painful to plan for the future without him. But I have to and I have to keep moving. My ‘Staci 3.0’ has truly shown me who I was meant to be with, God and Me. And that’s it. If others want to join me on my journey, then join but this is my journey to own and enjoy. Jump on when you want and jump off when you want – that’s your choice. All I know is that I’m on this roller coaster ride whether I like it or not so I’ve decided to enjoy the dips, the climbs, the fast downs, the spins, the upside down loops…all because I know I’m on it for the thrill and that my God will keep me safely in my seat. When he’s ready for it to come to a stop and he wants to show me what’s at the end of the ride, I’ll be there but until then, I’ll just sit back and relax (or at least try to).

And until then, I’ll just enjoy being with me – the person I was meant to be with for the rest of my life.